JIA has begun awards for new architects in Japan since 1987, and since 2005 it has been awarded the Japan Architecture Grand Prize for only one work. This award is selected from buildings in Japan, and the Awards of 2018 was selected from 195 works completed from January 1, 2015 to the end of December 2017 (three years) .

It is said that both the Japanese architectural award and the work award sponsored by the Architectural Institute of Japan are the best for awards related to architecture in Japan. Mr. KOBORI Tetsuo (Representative of Tetsuo Kobori Architectural Design Office), who was in charge of architectural design, won these two titles for the first time in 2016.

NIC has been designed with the environment in mind, and has been able to make full use of Fukui's nature, such as wind, groundwater, and sunlight to reduce the environmental burden. It was highly evaluated for its ability to create a space where people can interact with each other, and various people can interact to create innovation. The jury also commented that "it can be said that NIC are showing how Japan's manufacturing research institute should be for three to five years ahead.

Mr. KOBORI Tetsuo said, "I'm surprised and glad that the architecture we have created with the members of NICCA Chemical is appreciated. I really appreciate that the won of the place like a" BAZAAR", where people gather and innovate, will accelerate the future of corporate research and innovation creation, as well as brighten the future of Japan. " 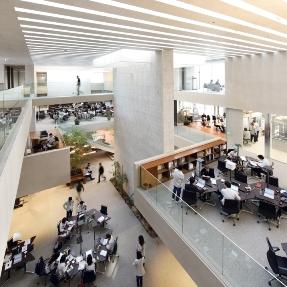 The whole inside view of NIC from the 4th floor